If you live and drive in the GTA, chances are you're paying a lot for your auto insurance coverage 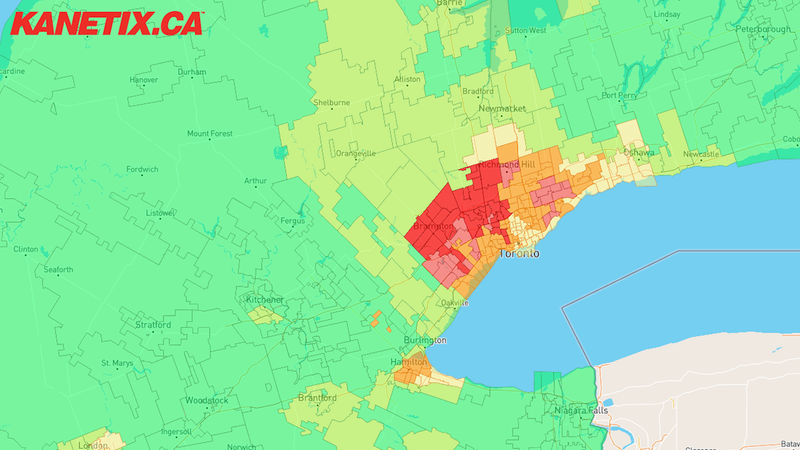 There are a lot of variables that go into determining your auto insurance premiums including your driving record, insurance history, the make and model of your vehicle, and how likely it is to get stolen to name just a few. Another important factor that matters is where you live.

Kanetix.ca's InsuraMap lets you compare auto insurance rates from across the province to determine the most expensive--and the cheapest--areas for auto insurance in Ontario.

What does InsuraMap tell us about the premiums Ontario drivers pay? Like last year, if you live and drive anywhere in the Greater Toronto Area (GTA), chances are you're paying a lot for your auto insurance coverage. Provincially, the average comes in at about $1,316, yet many cities in the GTA exceed the provincial average; some by a little, but most by a lot.

Ontario car insurance can be expensive, even more so if you live in:

Based on a 35-year-old driver of a 2014 Honda Civic (Canada's best-selling car) with a clean driving record, all of these cities have an estimated annual auto insurance rate higher than the provincial average of $1,316 per year.

With more drivers on the road, it comes as no surprise that six out of 10 of the province's most populous cities are listed (Toronto, Mississauga, Brampton, Hamilton, Markham, and Vaughan). But population, in and of itself, does not determine auto insurance rates. It's really about the likelihood of a claim. If you live in a city or town that--for whatever reason--reports more claims (or more costly claims) than other areas, your premiums are likely going to be higher. It all boils down to the numbers.

How Did Some of the Other Big Cities and Towns in the Province Rank?

Unsurprisingly, for the cheapest car insurance rates in the province, you'll have to look outside of the GTA. Some of the lowest premiums in Ontario are found in Kingston, Cornwall, Brockville, Trenton, Port Hope, Picton, Napanee, Cobourg, Belleville, Parry Sound, Huntsville, Gravenhurst, and Bracebridge. The estimated premiums for these places ranged from about $850 to $900 a year according to InsuraMap information.

Whether you live in a big city or small town, there are ways to save on the premiums you pay:

Lastly, it goes without saying that we're keen on comparison shopping, but it is absolutely one of the easiest ways to save. We shop the market to help you find the lowest rate and no one covers as much for the market as we do. Compare car insurance quotes at Kanetix.ca today.

Originally updated annually with the latest insights from InsuraMap; however, for the 2019 InsuraMap findings read: The 10 Most Expensive Cities for Ontario Auto Insurance.