So Much For Being Polite, Kanetix.ca Study Finds Majority of Canadians Exhibit Road Rage 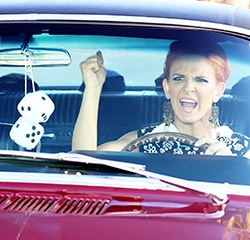 A new survey from Kanetix.ca shows Canadians' bad driving habits haven't changed much in three years. We still feel a need for speed.

Canadians have a reputation for being polite, but put us in a car and suddenly we're a nation of aggressive drivers with a penchant for speeding, cursing and honking our horns.

Yes, for a country known for saying "sorry," Canadians are unapologetic on the road. A new survey from Kanetix.ca found 76 per cent of Canadians admit to at least one bad driving behaviour. This is down slightly (three per cent) from 2012, when Kanetix.ca first conducted this study.

Speeding remains the most confessed offence. Fifty-eight per cent of Canadians surveyed admitted to putting the pedal to the metal, though this also saw a decrease of about two per cent from 2012.

Road Rage in Canada By The Numbers

While Canadians show marginal improvements, bad driving behaviours remain largely unchanged from three years ago. The only habit that saw a significant drop was the use of profanity out of frustration with traffic or delays, which fell from 39 per cent to 31 per cent, an interesting observation considering traffic congestion is generally increasing across Canada.

Approximately one in five Canadians claim they are perfect drivers.

We analyzed data for three provinces in particular: Ontario, Alberta and Quebec.

Albertans like it fast and furious. Two-thirds admitted to speeding, the most of any province, and while cursing's not as common in Alberta as it is in Ontario, one third admitted to using profanity when frustrated with traffic or delays. Albertans were also the most likely to admit to using hostile hand gestures towards other drivers, with almost 30 per cent confessing.

Quebec drivers are the least likely to admit to any bad driving habits. A full quarter claim they're perfect drivers, and less than half admit to speeding. The province wasn't completely innocent though. One quarter admit to following other vehicles too closely.

Kanetix.ca recommends the following tips to help you reduce your likelihood of engaging in bad driving behaviours:

By becoming a calmer and safer driver, you also reduce your chances of getting a ticket, getting into a collision, and facing the inevitable increase in car insurance hikes. Even one ticket can have a significant and negative impact on your premiums. Don't let road rage cause rogue rates.