Here's how NOT to spend your holiday or vacation. 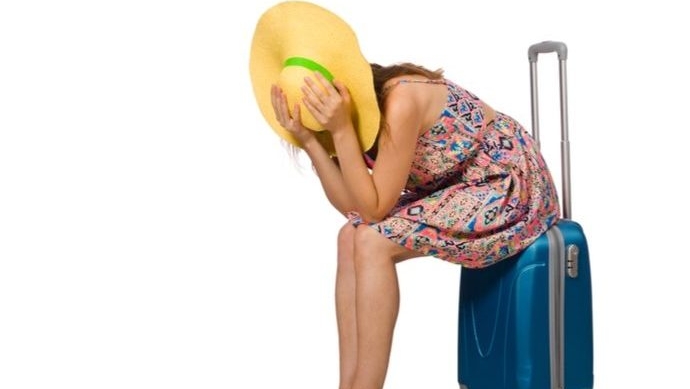 The worst travel stories can happen anywhere in the world. And, while vacations are supposed to be filled with "Ohh," and "Ahh," no one wants to say, "Get Me Outta' Here!" Maybe catching a cold or the flu is your worst travel experience but for these guests, their vacation was a holiday nightmare. If you're wondering, "What’s the worst that could happen?" Here's how NOT to spend your holiday or vacation.

A man booked a flight out of Los Angeles, California and found the bathroom was out of order. He asked about the technical malfunction and was told the toilet would reverse flush. He pictured a scene out of National Lampoon with the toilet projectile vomiting up its contents at him and said, "No, thank you." Heading back to his seat, he also said "No, thank you" when the beverage cart went around.

There’s a well-known story in the U.S. and it comes from Adventureland at Disney’s Magic Kingdom. A huge golden camel statue was set up and guests weren’t aware that it purposely spued water from its mouth directly at them. While this came as a relief to some guests visiting the park on swelteringly hot days, it was no laughing matter to others. Some tourists might have had contacts in or maybe they had just gotten their hair done for pictures at the park. Children and the disabled could also be startled by the sudden blast of water to their faces. There was also a lot of complaints about crowds of people that had already gotten doused who stood by to watch unsuspecting tourists approach for their “shower”.

While we’re on the camel topic, visiting the Sahara Desert is supposed to be fun. There are beautiful sand dunes, amazing sunsets and, of course, camels. But, a Moroccan desert tour indicated nothing about the crappy situation ahead. Guests were told there was no bathroom and to use the facilities, they needed to “dig a hole”. Tour providers stated to “look for toilet paper sticking up in the sand.” This was to prevent the tourists from using the same paper other guests used. Wait, what? On top of that, guests weren’t allowed to bring their own TP. On top of THAT, the area smelled like feces - - but not human feces - - camel feces. Apparently, no one told the camels to use the paper sticking up in the sand. And, in the hot desert, the smell was horrific as there were “landmines” EVERYWHERE.

One group of friends in Belize had their trip interrupted by a burglar. The group was already disappointed by the extreme heat and mosquitoes. And, now there was a burglary. A person in their group had his phone swiped while they were out of the hotel one night. But, the tourist wasn’t satisfied with filing a report for the insurance. Instead, he asked for the CCTV footage. When he saw the culprit on video, he searched through the small town with a group of local women he befriended until he found the thief. Needless to say, the vacation was interrupted but the phone was retrieved.

Tip: When preparing for overseas travel, your home insurance policy can cover any thefts. Also, keep all valuables locked in the safe or stored in your luggage and use a combination lock.

This one’s not for the squeamish. One guest found it no laughing matter when he checked into an Aloft Hotel. Taking an elevator ride, he was shocked to find feces on the wall in the elevator. He complained to the front desk, who was aware of the problem but never shut down the elevator - and the culprit wasn’t finished. Using the laundry the next day, the tourist found that someone had put feces in the dryer with his clothing. Needless to say, Aloft didn’t receive a good rating from the guest.

One unsuspecting tourist was in Asia in Hadong, an area known for its wild tea drinks. At a festival hosted by a tea museum, the man arrived with his wife and other family members. But, they noticed not a lot of people were around. He asked inside and was told the event was cancelled. The museum rep stated the announcement was made - but only in Vietnamese.

Note: Check with your travel insurance as it might cover some tour cancellations if you can't get a refund.

The Hotel Carter was voted dirtiest hotel in the U.S. for years. Why? One guest was bold enough to check it out. And, the guest that visited the hotel said it earned a place in Hades as the worst hotel he EVER stayed in. Here's a list of the problems: They should just close down and open as a haunted house.

A Few Minor Renovations - No Problem

A group of friends in San Francisco, California ran into a renovation nightmare at their hotel. The recently refurbished hotel had no lights in the rooms. No problem. They got ready to call the front desk. But, there was no phone. No problem. They went to the front desk and were reassured the matter would be rectified by the time they returned. Later that night, bulbs at the front desk were waiting for them. But then they couldn’t find a single outlet to plug the lamps into once back in the room. Heading back to the front desk, they were given a new room - without an alarm clock. No problem They changed rooms again only to find the electric blinds weren’t connected so they couldn't see outside. But, this time they stayed put. An electrician that called up to the room said there was no way he could arrive to fix the blinds in time. The exhausted guests gave up and went to bed.

The Exorcist in Croatia

This one's not for the faint of heart. One traveller recalls the time he was in Dubrovnik near the Adriatic Coast. Getting off a bus for a few minutes, he stopped to buy a peach but there was nowhere to wash it. The man got back on the bus and ate the peach unwashed. By the time he reached the next stop called Split, he was projectile vomiting on everything. He recanted that he likely resembled Linda Blair from The Exorcist. He was experiencing dry heaves after all the bile was out of his system. Hence, Split, will likely be remembered as spit. It's a reminder to purchase travel insurance.

Some countries can charge high fees if you need emergency medical attention. And, that expensive bill is a surprise you don't want on your trip. Just like someone vomiting on the seat next to you!

Tip: Always wash fruit before eating it. You want to clean off any bacteria, pesticides or animal waste products.

Down to the Wire

One student in London was caught off-guard at the last minute. He was heading to Heathrow Airport and used the last available money he had on the Tube train ride. Upon arrival at the airport, he found the line to check-in was going out the door and his flight was departing soon. He was concerned because his Visa would expire in two days. Not only was he fearful he would be deported or banned, he also couldn’t be absent from his job. Then he was told, “Sorry, sir. You can’t board. We’re overbooked.” The next cheapest flight was $600 USD. Fortunately he had an emergency credit card which he used. If you’re ever in this situation, travel insurance can cover flight delays, cancellations and lost bags.

Don’t Get Taken for a Ride

The Vietnam capital is favored by some but not this tourist. She was in Hanoi and had to catch an early flight leaving from Thailand. A very persistent cab driver in an unmarked car said he would take them to the airport. Sleepy from their partying the night before the girl and her friends agreed to the 30-minute ride. When the tourists asked how much they owed, the group found out the currency conversion meant they owed $200 USD for the cab. Because they spoke only a little Vietnamese, they couldn’t negotiate. The driver and his friend began yelling at the tourists who were now terrified. The group was finally able to talk their way out of the bad situation by requesting a drop off back at the hotel where a real taxi picked them up. And, this one had a meter they could see.

Ready to Shop for the Best Travel Insurance?

No one wants to experience a travel nightmare like crabby camels or unclean hotel rooms. To protect your trip, always purchase travel insurance for your trip. Then contact your home insurance provider if there's ever a theft while you're on vacation or holiday. You might also find that your credit card company offers some type of trip protection. For help with insurance or if you have questions, contact Kanetix.ca. With Kanetix.ca, you can get quotes from Canada's leading insurance providers (and have a safer trip). If you're a snowbird, look for snowbird travel insurance where you can save up to 53 percent on travel insurance. Compare insurance quotes today!